LUBBOCK, TX (March 10, 2020) — To help educate people about the economic opportunities and threats that the U.S., Texas and Lubbock face, PlainsCapital Bank recently held its 12th annual Economic Outlook Conference in Lubbock, Texas. Over 300 local business and community members attended the event at the Texas Tech Merket Alumni Center to hear from Dr. M. Ray Perryman, a Texas economist and president and CEO of the Perryman Group.

Perryman shared his insight and projections about the local and national economy and covered various topics including the economic effects of COVID-19, Lubbock’s economic performance, and the Texas oil industry. Perryman also shared copies of his economic forecast, which included his population, employment, and industry growth expectations for the Lubbock region. 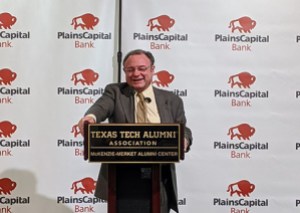 The Economic Impact of COVID-19

Perryman started his presentation by describing our markets as a system built by people taking risks, clarifying that there’s a significant difference between risk and uncertainty. He says the COVID-19 outbreak is the latest example of uncertainty bruising the economy because of its many unknowns, especially how long it will last.

Perryman addressed the possibility of COVID-19 causing a recession in the U.S., saying it could eventually happen if we haven’t learned more about the virus and seen headlines shift focus by May 2020.

“It’s going to take not solving the problem, but defining the problem before we see things begin to trend upwards again,” said Perryman. “Once we know what the coronavirus is, I think we’re going to see all of this calm down and the markets will return to a sense of normalcy.”

According to Perryman, Lubbock’s overall economy is doing well with consistent job growth, the attraction of new retail investments and the expansion of various industries. He said that Lubbock’s population growth is slightly lower than the state of Texas, but it’s important to view that in perspective because it’s far higher than the U.S.

“There are a lot of good things happening in Lubbock,” said Perryman. “I know from living in Odessa that building new infrastructure and investing so much in the city really improves quality of life for its people and reaps great economic reward.”

Perryman recognized that West Texas is and will continue to feel the effects of the ongoing oil-price war between Russia and Saudi Arabia. In the short-term, he expects mid-size Texas oil companies to take a hit from the oil-related disputes, which will likely be felt by the entire area.

Because of the Texas oil industry’s initial stability before the oil-price standoff – primarily from accessible reserves and low production costs – Perryman’s long-term outlook is positive. He believes that once the issues are resolved, the oil industry in Texas will be able to recover fairly quickly.

“When you see oil and gas prices this low, particularly in the last few months, West Texas will feel the economic impact. However, I wouldn’t change my five-year forecast at this time, because the world is going to need the energy to support economic growth and we’re going to supply that energy,” said Perryman. “A lot of things are in place and working in a good direction, but this will be a circuit breaker until we can get back on track.”

About the Economic Outlook Conference

PlainsCapital Bank hosts its annual Economic Outlook Conference in Lubbock to best serve the businesses and people of Lubbock, as well as strengthen the Bank’s already strong relationship with the community. Following the success of this year’s event, PlainsCapital intends to continue hosting the conference for the foreseeable future.

“We’re grateful that Dr. Perryman was able to join us again as the speaker for our Economic Outlook Conference,” said PlainsCapital Bank Lubbock Market President Barry Ballinger. “PlainsCapital Bank is committed to providing the people of Lubbock with the resources they need to make informed financial decisions, and we feel confident that Perryman’s level of expertise in today’s markets delivers on that promise.”