“Through our relationship with PlainsCapital, they were able to come to the rescue and get the transaction over the finish line when no one else could.” – Shane Spillers, Co-Owner of Eno’s Pizza Tavern 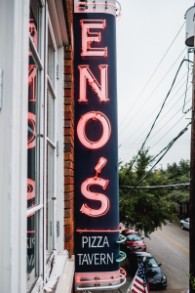 Eno’s Pizza Tavern considers itself a small slice of Dallas’ Bishop Arts District. The small-town pizza joint opened its first location in Bishop Arts in 2008, thanks to its fearless leader, and mother of the Spillers family, Donna Spillers.

“We’d been designing restaurants since the 80s and knew the hard work that went into owning one,” says Spillers. “My son, Matt, went to culinary school and studied in Italy. His favorite food was pizza, so we decided to give it a go.”

A building came available, and the family jumped on the opportunity. Northern Chicago style cracker-thin crust pizza was its inspiration, but its craft beer selection is what set it apart from the start.

“It was unheard of at the time,” Spillers explains. “Bishop Arts was also a dry area at the time. We had to go pick up the beer—no deliveries allowed. We had 20 beers on tap. Our staff would take the empty kegs, load them up, drive across the Trinity River, and load up the fresh kegs to bring them back to the restaurant.”

Donna’s older son, Shane, soon left his consulting job to join the family business, as a server, and is now co-owner. Eno’s longstanding relationship with PlainsCapital Bank has allowed the business to grow and prosper across the Dallas metroplex.

PlainsCapital Bank Senior Commercial Loan Officer, Ana Hernandez, stepped in to get the transaction done. It proved to be one of the largest transactions Eno’s has done with PlainsCapital, helping to transform the business.

“Through our relationship with PlainsCapital, they were able to come to the rescue and get the transaction over the finish line when no one else could,” Shane says. “Ana’s done a great job of supporting us over the years. If she hadn’t helped, we may not be in business today.”

The transaction allowed Eno’s to move forward in a healthy way, making room for more business opportunities, including the opening of two new locations—one in Forney and the other in Cypress Waters. PlainsCapital helped to finance the Cypress Waters location. The Spillers plan to open 10 Eno’s locations by 2030 and are in the process of building a commissary kitchen to support its growth. 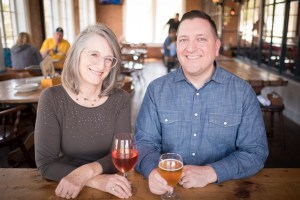 Even through the challenges of the COVID-19 pandemic and being forced to furlough 75% of its workforce, Eno’s offered everyone an opportunity to come back. Ana Hernandez and PlainsCapital have kept in touch every step of the way, allowing Eno’s to remain strong and rooted in the community, the same way it started.

“We say that we are not really in the restaurant business,” Donna Spillers says. “We are a solution for a neighborhood because the people are what’s important to us.”

Complete the form below to start banking with confidence and momentum.